Last April our family took a 10 day tour around part of New Zealand’s South Island.  During that trip, we spent a few days in Dunedin. Dunedin is located in the Otago region of the South Island and is definitely worth a visit.

We stayed in a little chalet on the Otago Peninsula that we found on AirBnB. This was a great area to stay.  It was away from the Central City and very quiet.  It was a little nerve racking driving out there the first time as the roads are VERY winding.  It did get easier the more we drove it though. The house was also directly across the street from the water and at low tide, you could walk out to the island in the middle of the inlet. The kids really loved walking around and finding shells and cool rocks.  It was also really dark at night and we were fortunate enough to catch a glimpse of Aurora Australis even if only through the clouds. The peninsula is full of little oddities like trees growing out of seemingly nothing and doors to nowhere.

We spent one full day just on the Otago Peninsula. This was spent driving all the way out the the tip of the peninsula to the Royal Albatross Center.  We decided not to pay the admission to tour the center and see the nesting area but we did walk around the hillside and got to see a few albatross just floating in the distance over the water.  Even from a distance it was pretty impressive.   We also saw some seals frolicking in the surf below.  We also paid a visit to Larnach Castle which is modeled after Scottish castles. It was built by an Australian of Scottish decent and the family’s story is a bit tragic. It was a lovely place to walk around, including the gardens which are well tended and highly varied through the property. We enjoyed tea at the cafe on site. 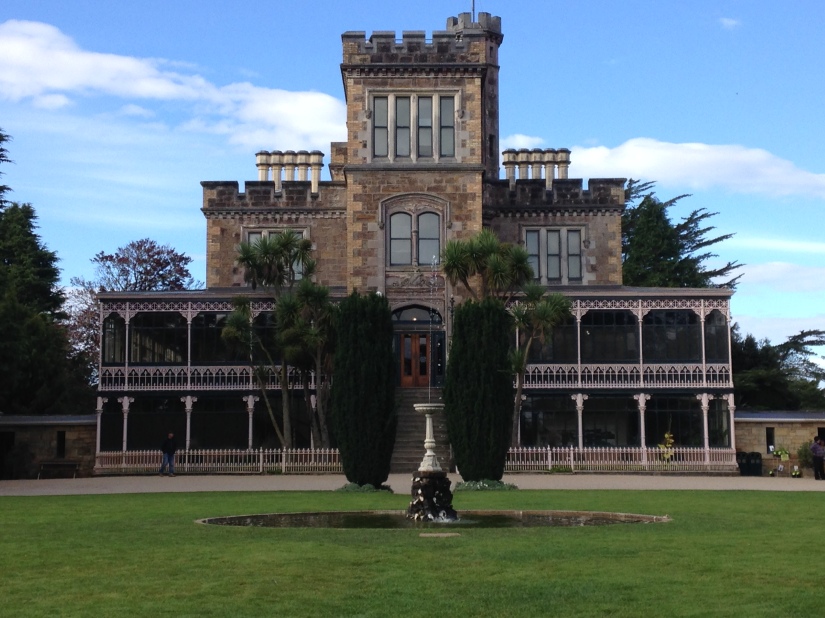 Given that it was autumn when we took this trip, the weather was a little uncooperative.  We had a couple of rainy days, but found some great indoor activities.  The Otago Museum kept us busy for an entire morning.  They have some great stuff for kids (see the sea turtle below)  including an entire room of model ships of all kinds.  Just be prepared to cover your ears, there is a bell that kids can ring at will and it is loud.  The Toitu Otago Settlers Museum was also a great indoor activity.   It tells the story of how Dunedin “grew up” and includes information on all of the cultures that were integral to the building of the city. It has some great interactive exhibits and really held the kids’ attention.

There are loads of beautiful gardens located throughout the city.  We only had the opportunity to visit two.  We spent lots of time wandering around the Dunedin Botanic Gardens.  You can buy a bag of duck food for $1 and the kids had a blast feeding all of the ducks in the pond near the visitor’s center. We took the “train” ride through the garden and ate lunch at the Croque-O-Dile Cafe.  The sandwiches were pretty good and they had lots of crocodile themed toys and books for the littles. We also paid the admission price to be able to tour the Dunedin Chinese Garden which is located near the Settlers Museum.  We figured that since we are heading to Beijing next, we should start immersing ourself in the culture of our new home.  The Garden is really lovely with a great mix of traditional Chinese architecture, rock garden accents, and plant life.  They also had a fun little scavenger hunt for the kids to find roosters hidden all around the garden (2017 was the year of the rooster after all).  There was even a tea house to grab a snack.

We split our last day between the Cadbury Factory tour and just walking around this beautiful city.  The kids were super excited to spend the morning at the Cadbury Factory.  I mean, free chocolate! I would have personally liked to have gotten more of a behind the scenes look than we got, but it was interesting to see the factory and hear the stories of how the candies we have grown to love are made.  We got lots of free samples, but I would have been happy to fill my bag with Cadbury eggs and Jaffas. The kids enjoyed taste testing the assortment.  We, of course, exited through the gift shop and stocked up on a few favorites.  Before we left entirely, we grabbed a treat at the cafe too.

The afternoon was spent wandering and enjoying the unique architecture of the city.  We visited the train station, several churches, and enjoyed looking at the very British style buildings  throughout the city. I especially liked the clocktowers.

We couldn’t leave Dunedin without making one last stop.  The city is said to be home to the steepest street in the world (there is some debate, just being fair). Google it sometime just to look at the photos because mine doesn’t do it justice. We drove our rental car all the way to the top.  It was CRAZY steep.  In hindsight, it probably wasn’t the best idea.  Not only was I kind of freaking out the whole time thinking I was just going to start rolling backwards, but there isn’t really room at the top to turn around easily.  I dropped the boys at the top and they had fun walking back down.

I hope that you get a chance to visit Dunedin at some point.  It is a city of diversity from the people to the architecture to the flora and fauna.  It was a fantastic place to visit and so much fun for our family.